South African artist Suné Horn has proven herself a jack of all trades in the arts’ realm, working in mediums ranging from drawing and printmaking to jewelry and embroidery, but that doesn’t mean she’s mastered none. Although her artistic inspirations show themselves in many forms, consistent and compelling themes of architecture, womanhood and power have been threaded in and out of her work over the years.

The following is an interview conducted with Horn in an effort to put her growth as an artist into words. Given her background in architecture, and the recurring appearance of those influences in her artwork, the conversation about growth began there.

Q. What are the ways your perspectives on architecture have evolved over the years?
A. When I was doing my thesis I was convinced that architecture could have a bigger impact on peoples lives. I still think architecture is capable of influencing the way people live, but I think people live their lives differently today, so the way in which it affects people changes. We stare at small screens more than we pay attention to what is around us. Architecture is also being produced in this fast paced era, and I fear that not enough time is spent researching or properly engaging with critical questions, because [clients] want to have a building complete before inflation affects the bottom line. And when the building is up it starts having an impact on peoples lives. To some extent I have put off practicing architecture to figure out where architecture is heading and whether or not I want to be a part of that.

Q. In what other ways can we see your personal evolution as an artist?
A. My work used to focus a lot more on themes of being a woman in this world. When I was younger and angrier, I looked at ways in which women were being shamed for being an object of temptation, and then exploited to be that very thing. It gave me solace then that men could reach the moon, yet not understand their female counterparts. With time the themes have adapted to include women taking charge of their power, using their sexuality to empower themselves and to also manipulate. Art has been a good way for me to deal with the experiences associated with being female in a male dominated world. It has definitely helped me overcome my anger and also forced me to look honestly at what it means to be a woman. 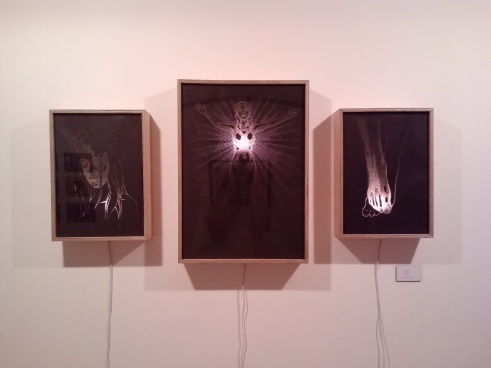 Q. You’ve put out something new in different mediums in each of the last few DJAC shows, and you seem to have worked with everything. Do you have a favorite medium to work with?
A. [I enjoy] the freedom to play with different mediums and challenging myself to use different ways to express my ideas and feelings. I prefer mediums that allow me to complete work fast. I don’t like waiting, but I don’t mind investing a lot of time in something that challenges me – like cutting and placing thousands of pins to make a female bust. Oil painting for example is something I dislike because it requires so much patience. I respect artists who have mastered that skill. At the moment I enjoy embroidery a lot.

Q. Is there something particular you get from [embroidery] that you don’t get from anything else?
A. Embroidery allows me the challenge of “drawing” or “painting” with thread, which takes a lot longer than just picking up a pencil or a brush and producing it quickly, but it’s also stimulating seeing something come to life out of thread. It’s also very relaxing.

Q. Any ideas for what you’d like to do next?
A. I would like to focus on 3D objects next and I’d like to work with metal again. The conversation about prison architecture is being picked up on globally, so I want to focus on that again. Conscious entrapment is another theme I’d like to look at.

Q. Can you explain your intended process for that?
A. I’m currently just making sketches to try and figure out what I want to do. I’ll probably start to experiment with soldering soon. I’m looking forward to my summer vacation, so I can focus on creating something.

Visit Horn’s website for more information about herself and her work.